Born 1911 in Budapest where he later studied in the Art Academy under Glatz Oszkar, Reti Istvan and Csok Istvan.

Undertaking study travels in Italy and France Koempoeczi Balogh painted in an impressionistic style. In 1943 he had a personal exhibition in the Hungarian Art Salon.

Developing a genre for portrait painting he became renowned for his ballerinas and eloquent ladies distinguished by their tender pastel colours.
Grand floral still life compositions painted on large canvasses with soft and gentle brush strokes became very sought after in the mid 1960’s, these “Flower Pieces” were also being exhibited at the Devon Galleries in Elm Hill, Norwich to popular acclaim.

The provenance of the painting illustrated “Floral Arrangement” was originally from Devon Galleries circ 1966. 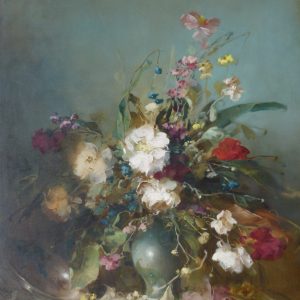