Campbell Archibald Mellon was born in Berkshire on June 16th 1876; he moved to Nottingham in 1903 to work as a travelling salesman and studied under Carl Brenner, a nephew of B. W. Leader.

In 1928 Campbell Mellon moved to Norfolk following in the footsteps of the artist Sir John Arnesby Brown RA, whom he greatly admired. He lived in a house on the cliff top overlooking Gorleston-on-Sea and for three years became a student of Arnesby Brown, forming a lifelong friendship.

Living with a view of the beach and harbour Campbell Mellon brilliantly captured the holiday makers on the beach and although he had used dark “muddy” colours for his early landscapes his later beach scenes were painted directly into the sun giving warmth and light.

Campbell Mellon was a founder member and the first Chairman of the “Great Yarmouth and District Society of Artists” formed in 1927, he exhibited at the RA, RBA, ROI, RW and at the Walker Art Gallery Liverpool, being elected ROI and RBA in 1938. 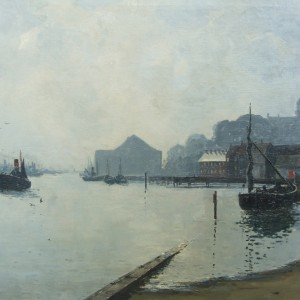